Tantaline® has proven to be the most reliable material available for hot sulfuric acid corrosion media.

The corrosion rate of Tantaline® in sulfuric acid is negligible in any concentration from 0% to 99% up to a temperature of at least 150°C. 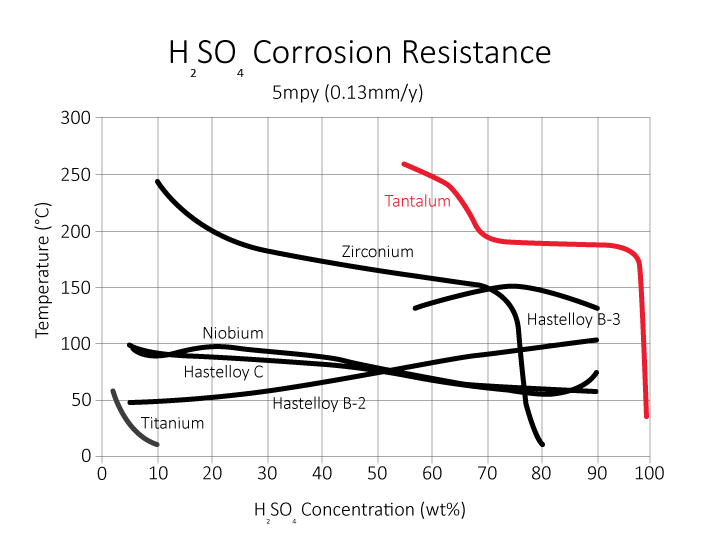 In diluted sulfuric acid (less than 10%) the aggressiveness of the acid is limited, so austenitic and duplex steels and to some extent titanium may be a cost-efficient option in the low temperature range. At temperatures above 100°C, more corrosion resistant materials like tantalum or Hastelloy®* grades may be required.

Corrosion in Sulfuric Acid in the Concentration Range 10% to 90%

Sulfuric Acid in concentrations between 10% and 90% is known to be especially corrosive. Common type specialty metals like titanium and Hastelloy®* C276 will show rapid corrosion in sulfuric acid at temperatures lower than 100°C. Very few materials including zirconium and tantalum can be applied above the sulfuric acid boiling point. Tantaline® is by far the most economical option. Tantaline® will further maintain its corrosion resistance above the boiling point independent of the concentration up to 99%, whereas zirconium will lose its corrosion resistance in sulfuric acid at concentration above approximately 75%. 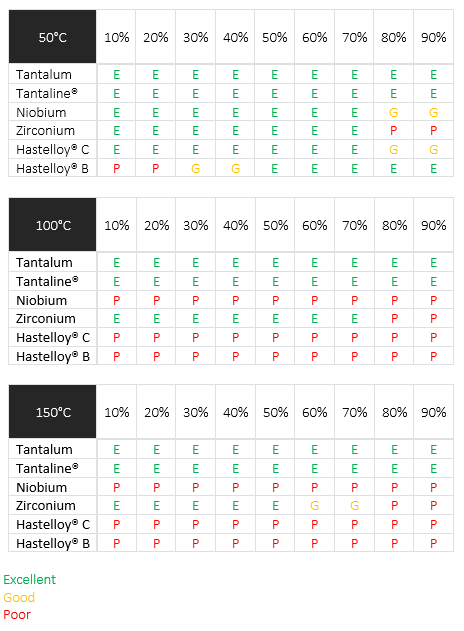 At very high concentrations of sulfuric acid (above 98%), the corrosion performance of tantalum as well as Tantaline® treated parts will decrease due to the existence of "free" SO3. Thus, tantalum in general may not be suitable for fuming sulfuric acid (oleum).

Hydrochloric acid is a solution of hydrogen chloride (HCl) in water, a highly corrosive, strong mineral acid with many industrial uses.

At lower temperatures, plastic or polymer linings like PTFE or PVDF may be a cost-efficient way to avoid corrosion. At temperatures above 150°C, diffusion through polymer materials becomes significant and a plastic lining is in general not suitable. At these temperatures, the mechanical properties of a polymer lining may be poor, forcing engineers to consider metal based solutions. 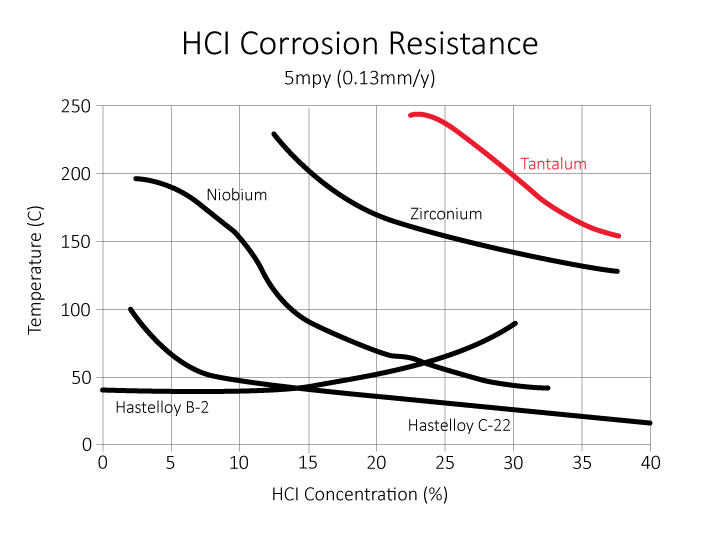 Compared with other specialty metals and alloys like Hastelloy®*, niobium and zirconium, the corrosion resistance of tantalum metal is second to none in hydrochloric acid. Tantalum metal is an element (atomic number 73) and is considered to be the most corrosion resistant metal commercially available. At temperatures less than 150°C and a concentration less than 30%, tantalum is considered to have a nil corrosion rate or less than 1 mil/year in chloride acid service.

For precision parts, such as valves, fittings and instrumentation where tolerances are critical to their operation, a corrosion rate 5 mil/year or larger would typically be considered unacceptable in hydrochloric acid applications.

The table here shows the relative corrosion resistance in hydrochloric acid at concentrations in the range of 5% to 35% and temperatures up to 200°C. As can be seen, Tantaline® has superior performance over niobium, zirconium and nickel based alloys.

Sour gas at high pressures, temperatures, and in mixtures of other acids (e.g. formic acids found typically in oil well stimulation environments) is extremely corrosive. In these environments, only a few materials can survive. Tantaline®'s tantalum surface alloys are immune to sour gas environments showing no measurable corrosion rate. This far exceeds the performance of traditional materials like C276 and various grades of titanium metals.

The terms "acid gas" and "sour gas" are often used interchangeably. Strictly speaking, sour gas is any gas that contains hydrogen sulfide (H2S) in significant amounts, whereas acid gas is any gas that contains significant amounts of acidic gases such as carbon dioxide (CO2) or hydrogen sulfide (H2S). Thus, carbon dioxide by itself is an acid gas but not sour gas.

Corrosion of Sour Gas Under Transportation

Natural gases that have high sulfur and carbon dioxide contents (sour and acid gas) are recognized as being extremely corrosive and dangerous. A special corrosion resistant material will have to be applied, as carbon steel is not suitable. Also, transportation from the wellhead to the sweetening plant must be implemented carefully.

At elevated temperatures, the hydrogen sulfide acid gas may become severely corrosive. Corrosion rates in the range "inches per year" or "mils per day" have been reported on C276 (Hastelloy®*) autoclaves used in laboratories. In these systems, Tantaline® offers an essentially zero corrosion rate.

Formic acid has proven to be highly corrosive at concentrations over 50%, especially if contaminated by acidic oxidizing chlorides. Because of its corrosive nature at high concentrations, material selection can be a challenge.

Formic acid is corrosive to many alloys including stainless steel, nickel alloys, and zirconium. Formic acid is a reducing agent, and it attacks stainless steels unless an oxidizing agent is added. Nickel base alloys perform better than SS316, but are attacked if an oxidizing agent is present. Zirconium has been applied successfully in some formic acid applications, but it is sensitive to attack from acidic oxidizing chlorides and other contaminants, such as FeCl3 and CuCl2. Thus, the use of zirconium is not recommended in this media and these materials should be avoided.

Tantaline®'s Immunity in Formic Acid up to 150°C

Tantaline® is the only commercially available metal that is not sensitive to corrosion attack from formic acids in any concentration up to 150°C, where impurities like FeCl3 or CuCl2 may be present.

Corrosion of Tantaline® in Formic Acid Above 150°C

Tantaline® displays very good corrosion resistance in formic acid at temperatures in the range of 150°C to 300°C. In order to estimate the exact corrosion rate, the specific composition of the media has to be evaluated individually.

Acetic acid (CH3COOH or ethanoic acid) is a colorless liquid with a pungent, vinegar-like odor. Acetic acid is mainly used industrially as a precursor in the production of cellulose acetate mainly for photographic film and polyvinyl acetate for wood glue, as well as synthetic fibers and fabrics.

Although it is classified as a weak acid, concentrated acetic acid is corrosive and attacks the skin. Acetic acid is called Glacial Acetic Acid in water-free conditions and causes severe corrosion issues at elevated temperatures.

The test solution was prepared using a reagent grade glacial acetic acid. Three test vessels consisting of new PTFE lined pressure vessels were used. Approximately 65 ml of test solution was poured into each PTFE vessel. A Tantaline® treated part was placed in the first test vessel; the second one had solid tantalum; while the third vessel had zirconium 705 in it. All of the test specimens were completely immersed in the glacial acetic acid and sealed. The assembled test vessels were placed in a laboratory oven at 205°C for a period of six (6) weeks (1008 hours). The test results show that the Tantaline® treated part far outperforms both zirconium 705 and solid tantalum, withstanding corrosion fully.

*Hastelloy® is a trademark of Haynes International